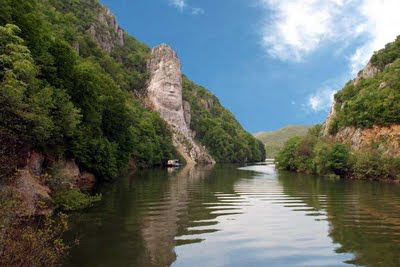 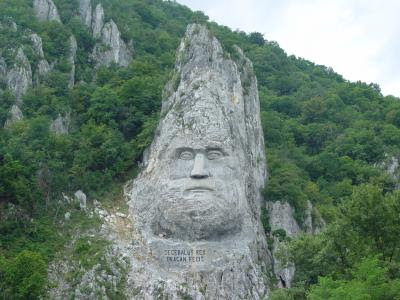 With a height of 55 m and a width of 25 m Decebal's head is the largest sculpture in Europe. It is located near Orsova on the left bank of the Danube.

Decebal's head out of the pocket of the businessman Iosif Constantin Dragan more than 1 million. Hot rock was considered an amusement park by vipers but escaped with her life always with serum antiviperin. At the head is the inscription "DECEBAL REX - DRAGAN fecit" ( "King Decebal - made by Dragan")

Historian Dio Cassius makes the following portrait praise: "He was very skilled in the act of war and skillful, knowing how to choose the occasion to attack the enemy and withdraw in time. Abilities in the traps, was brave in battle, knowing how to use sleight of a victory to escape safely from a defeat"

When the siege in the capital city were more than 50,000 soldiers Sarmisegetusa daci.Armata Romanian people include 120,000 plus a resist technique avansata.

Dacii heroic struggle. Trajan was the aqueducts that supplied water to destroy the city and leaving soldiers without water.

La Dacians only 3 days after it surrendered Dacians (slaves are taken and sold in Rome) and the city was conquered and destroyed the ground. Decebal chased by enemy cavalry to not fall into enemy hands slave suicide.

Romania is a tourist attraction worth visiting.

The beauty of Romania in pictures